Bedtime on the Farm 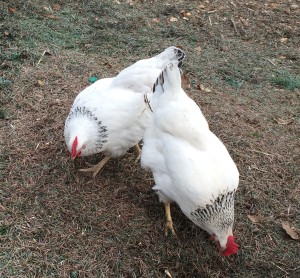 one with a normal reluctance for bedtime-

one who drags feet slowly

over the bare wooden floors

after the usual bedtime flap

gratefully under the clean sheets

waits for his bed to warm

dreams of home runs and horses

the older approaches his twin

lifts back the covers

every night it waits

that chicken is a nightmare

every night the younger brother

runs to tell their parents

every night that stubborn white chicken

flaps his wings and scratches

every night his parents say

Robert there is no chicken.

Look, I ran my hand over

the whole bed.  I felt no chicken.

I see no chicken.

every night with the bravery

of an advancing army

walks up and down his body

clucks in his petrified ear

trails a beak over his scaly feet

both clean and ready for bed

the boy and chicken sleep

I wonder if later

when Robert is older

a chicken is warm

on a cold winter night

and a wing flap breeze

Helen Shoemaker and I have been leading poetry workshops at a local Masonic Home.  One resident told this story of his brother and the chicken.  But he didn’t want to write it down.  When I got home, I couldn’t let it go.  So I wrote it with poetic liberties but the brother really did see a chicken in bed every night.  Then at the Christmas tree farm, we were greeted by two chickens, Henny and Penny, I couldn’t resist a photograph of the charming duo.  then it hit me that I had the chickens I needed to post this.   Admittedly there are two.  But these two can’t be separated for even a minute so I left them pared, something like the brother and his chicken.

Janice DeRuiter Eskridge, M.F.A. is a poet who worked for over a decade as a poet-teacher for California Poets in the Schools. Helen Shoemaker, Ph.D. L.M.F.T. is a university professor who teaches in the areas of child development and counseling. She is also a therapist in private practice.
View all posts by Winding Stream Press →
This entry was posted in Photography, Poetry and tagged Imagination, Life Stages, Observation, photography, Poetry, transformation. Bookmark the permalink.

But poetry, beauty, romance, love, these are what we stay alive for

Haiku out of Africa

A Young Man From Wales That Writes Poetry......

unleashing the world of words

Find yourself, and be just that

Tales of humour, whimsy and courgettes

Tales from the mouth of a wolf

Strength in Mind, Body, and Spirit.

Understanding someone’s way with words isn’t as simple as you think.

Welcome to the world of cats!

You could say that I am a struggling artist of some sorts...

through the luminary lens

Where the journey to expand your imagination begins

"Simplify life and then you can write"

Nature's nuances in a nutshell